Quick Links: Covid-19 | Anti-Racism | Livestreaming, Reopening and More | Emergency Response | Building Audiences | Inside Arts | Press Releases
The Young Performers Career Advancement (YPCA) program was designed by the APAP Classical Connections Committee to support classical musicians in the formative stages of their careers.
This year, both the 2022 and 2023 YPCA artists will perform in APAP's only self-produced showcase on January 16 2023, 7:00 pm (EST) at Carnegie Hall.
RSVP for the YPCA Showcase 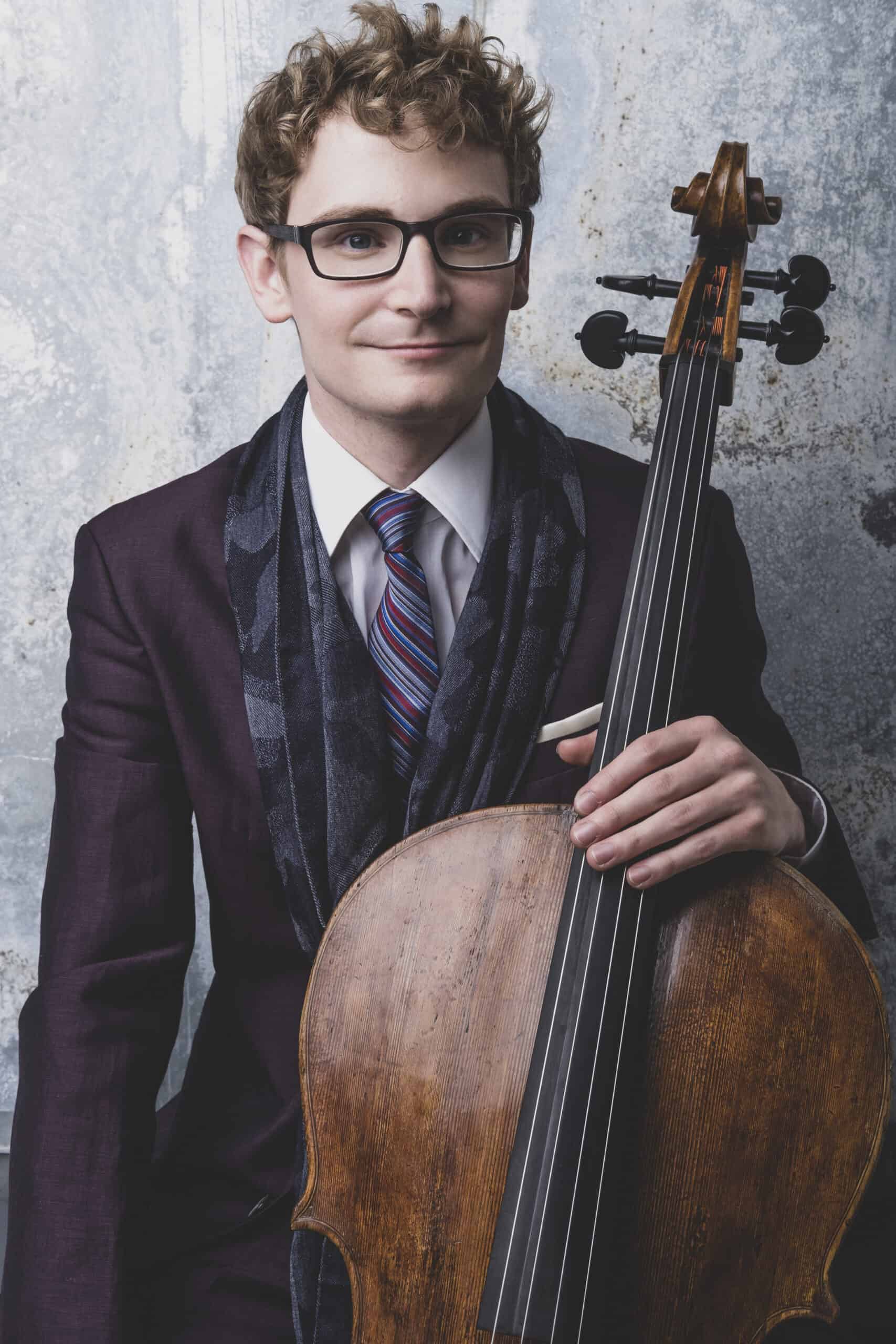 Alexander Hersh
Having given his Carnegie Hall debut recital in November 2022, cellist Alexander Hersh has quickly established himself as one of the most exciting and creative talents of his generation.

Raised in Chicago, Alexander Hersh began playing the cello at the age of 5. He received his B.M. and M.M. from New England Conservatory where he graduated with academic honors. Later he was a recipient of the Frank Huntington Beebe fund for studies in Berlin where he studied at the Hanns Eisler Hochschule for Musik Berlin. His previous teachers have included Laurence Lesser, Hans Jørgen Jensen, Kim Kashkashian, Nicolas Altstaedt, and Paul Katz. He plays a G.B. Rogeri cello, courtesy of Guarneri Hall NFP and Darnton & Hersh Fine Violins. 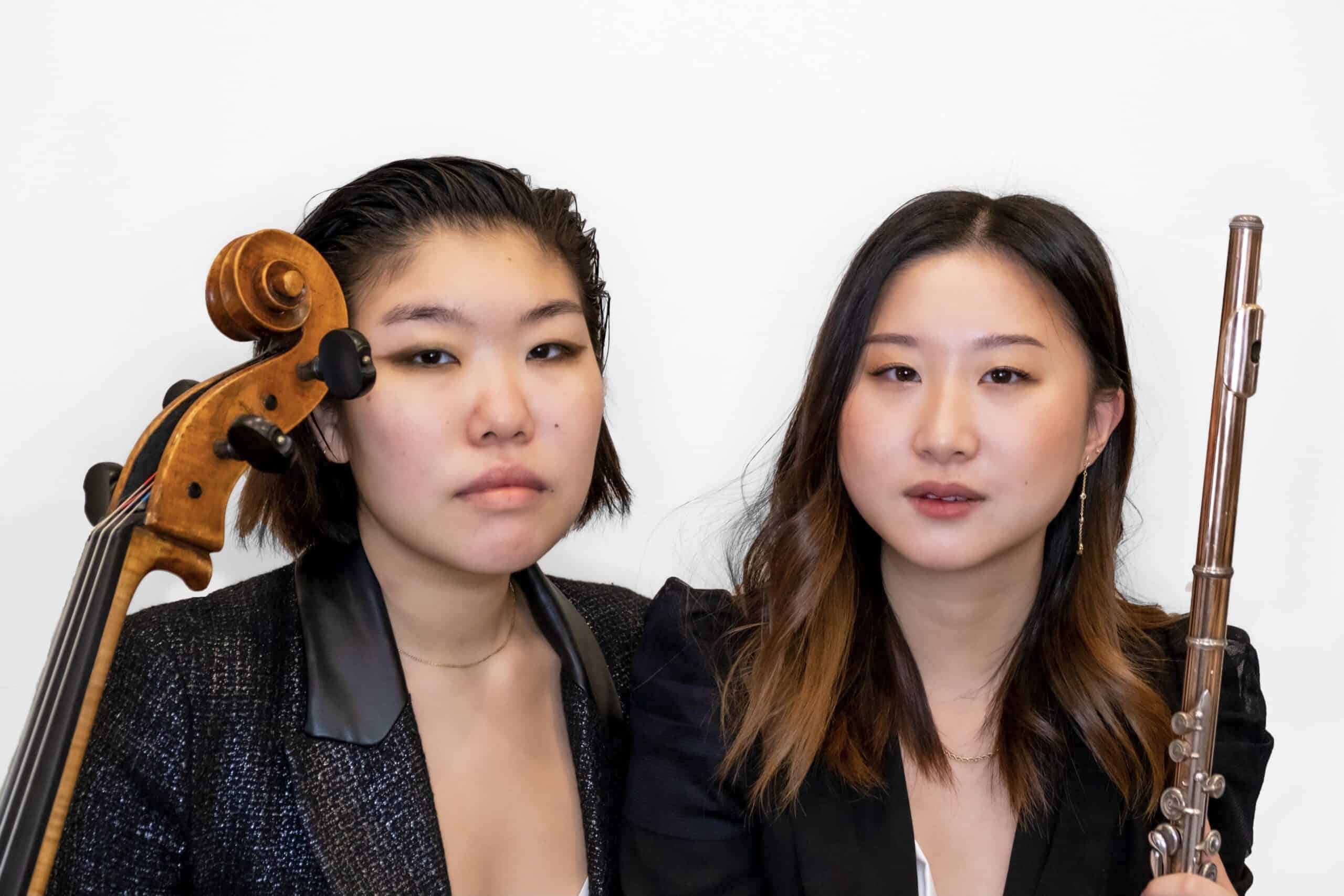 KOE
KOE (Eva Ding, flute and Emma Kato, cello) is a duo dedicated to creating interdisciplinary projects and performing the works of living Asian, Asian-hyphenate, and BIPOC composers. To that end they have presented multimedia chamber music shows as homages to immigrant families as artists-in-residence at the Center at West Park and at Arts On Site funded by the LMCC Creative Engagement Grant. They’re deeply connected to their respective heritages and cultures - Emma being a 2nd generation Japanese-American, and Eva being Chinese-born and New Zealand-raised - and make an effort to include pieces and composers that reflect that into their programming.

Originally a trio formed during the ensemble's graduate studies at the Manhattan School of Music, when KOE's pianist went on to pursue a different musical career path, they thought it would be the perfect opportunity to continue their chamber collaboration and explore their journey as a duo. Subsequently, they went on to become grant recipients of Chamber Music America’s Ensemble Forward Grant generously supported by the New York Community Trust and have performed at WQXR's The Greene Space, Joe's Pub at The Public Theater, Rose Studio at Lincoln Center, and Riverside Church.

Individually, Emma Kato is a New York born and raised cellist teaching through Suzuki Methods, educating young artists about the power of music. She strongly believes that music is a universal language that anyone can speak and express themselves through, regardless of one’s background. For Eva Ding, her background in theater plays a big role in the development of her work. She has seen how spoken word, set design, and costumes, can elevate a performance experience and wants to bring that level of collaboration between the arts to classical music. They both hold Master of Music degrees from the Manhattan School of Music having studied under the tutelage of Julia Lichten and Robert Langevin respectively.

Together with their interest in and passion for community engagement, education, and interdisciplinary exploration they’re dedicated to illuminating classical music in a way that is exciting and interesting for a new audience – one that looks and feels more like the world around us. 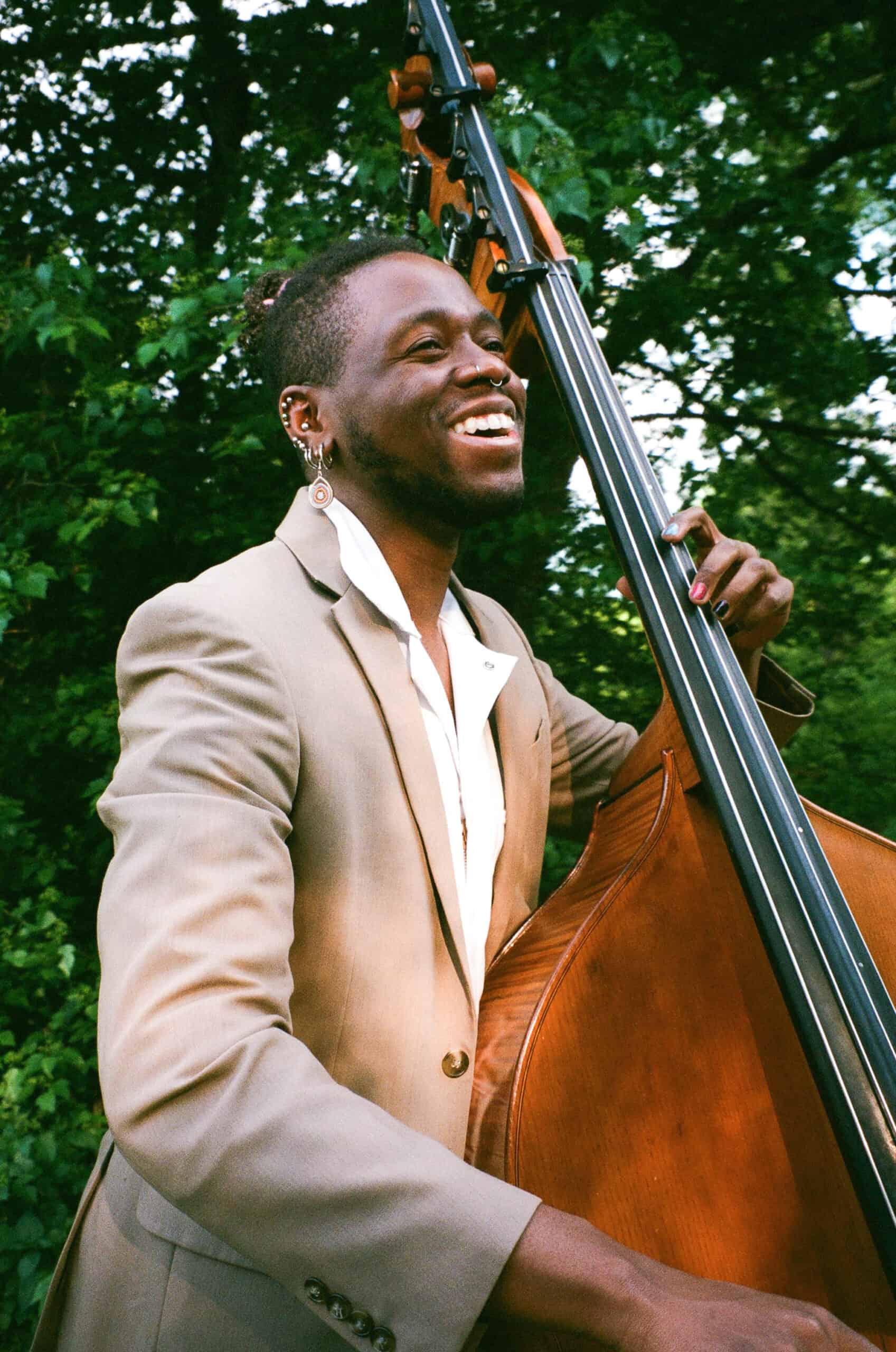 Kebra-Seyoun Charles
With outstanding virtuosity and the rare ability to communicate their ideas effortlessly to audiences, Kebra is poised to be a leader of their generation. After winning first prize in the 2022 Sphinx Competition, Kebra-Seyoun Charles has quickly made a name for themself by soloing in front of orchestras such as the New World Symphony, Indianapolis Symphony and Palaver Strings. Originally from Miami, Florida, Kebra received their Bachelor’s degree from the New England Conservatory of Music. Then, in 2022, graduated from the Juilliard School with a Master’s degree, at the beginning of which they were awarded tenure as principal bass. Kebra simultaneously received the prestigious Jerome L. Greene fellowship. In recognition of their talent and commitment to furthering their vision as a soloist, Kebra received Juilliard’s Benzaquen Career Grant.

Growing up the child of an African drummer and dancer, Kebra-Seyoun was exposed to music at a very early age. Having been steeped in jazz, gospel, and traditional African music, Kebra developed an interest in a multiplicity of genres. They honed their craft at the New World School of the Arts, in Miami, Fl, even performing at Jazz at Lincoln Center. In their early years Kebra-Seyoun was invited to perform at the Kagoshima Jazz Festival as well as the Aspen Music Festival and School.

In line with their upbringing, Kebra-Seyoun is able to give prominence to the dance qualities in all forms of music. Exhibiting their versatility, Kebra-Seyoun has performed alongside esteemed improvisers and composers such as Jon Batiste, at Carnegie Hall, and Tyshawn Sorey, at the New England Conservatory. Kebra-Seyoun was also featured in “Slugs’ Saloon” at the Institute of Contemporary Art in Boston, an interactive installation created by famed jazz musician and composer Jason Moran.

Currently, in addition to their solo career, Kebra-Seyoun Charles is a passionate chamber musician. Playing with groups like East Coast Chamber Orchestra, A Far Cry, Palaver Strings and the Sphinx Virtuosi afford Kebra the opportunity to showcase their musicianship while still playing within an ensemble. A prime example of this is their tenure on the 2019 Emmy award winning Broadway production “Hadestown”.

As if this weren’t enough, they also have 32 piercings. 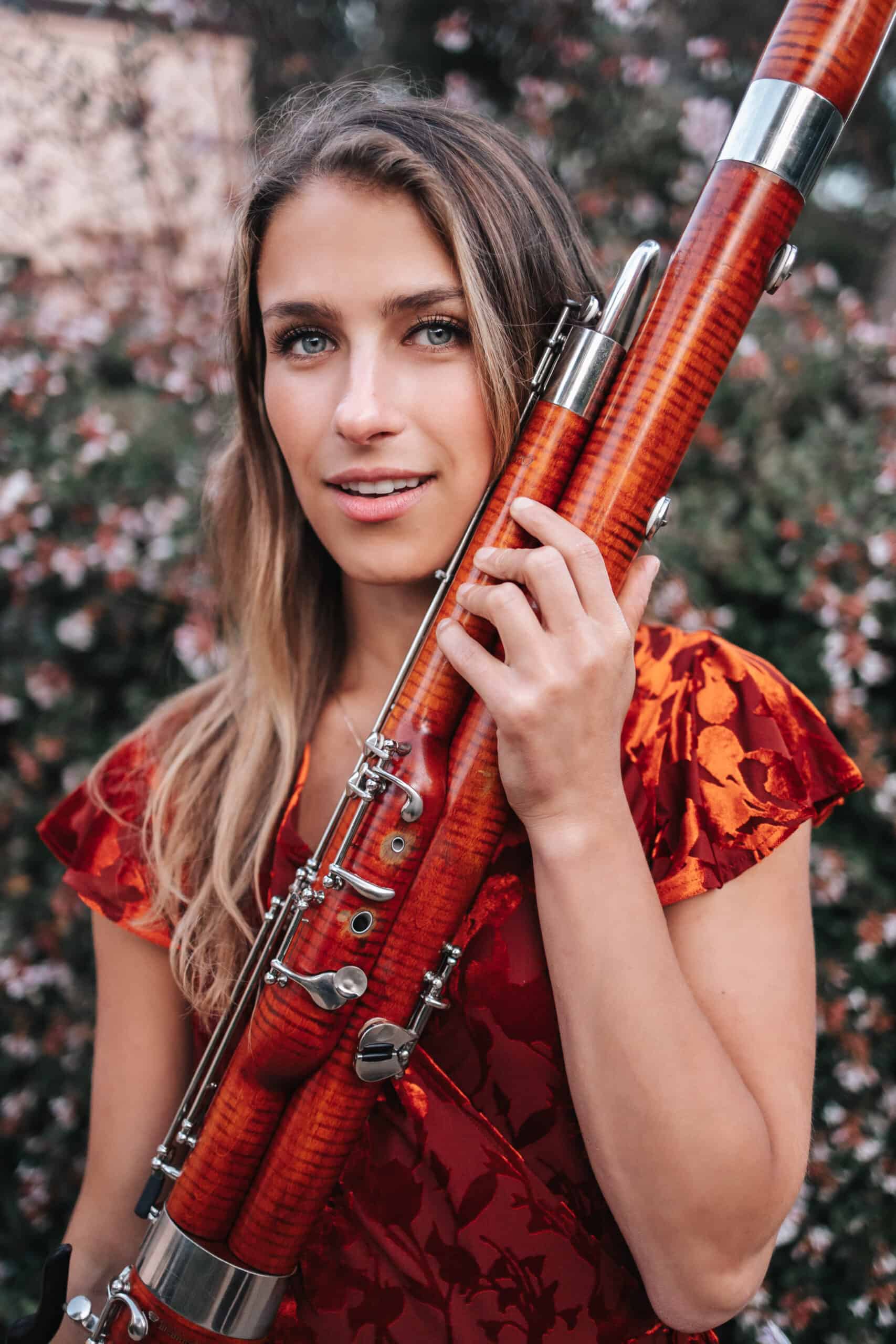 Eleni Katz
Hailed for her virtuosity and vibrant musical spirit, bassoonist Eleni Katz has established herself as a prominent soloist, chamber musician, and orchestral player. Eleni is a winner of the 2022 Concert Artist Guild Competition and has performed with the Saint Paul Chamber Orchestra, the Milwaukee Symphony Orchestra, the Fort Worth Symphony Orchestra, the Sarasota Orchestra, and as a member with the New World Symphony. Other recent appearances include a 2022 fellowship with the Phoenix Chamber Music Society, where she performed alongside David Shifrin, Valerie Coleman, and Gabriel Kovach.

A classically trained singer from Iowa City, Katz has always believed that the bassoon should emulate the organic nature of the human voice. In 2021, she commissioned and premiered “Sea Glass Partita for Singing Bassoonist” with composer Lila Meretzky. Drawing its lyrics from a poem that Eleni composed, the piece interspersed bassoon performance with singing and visual projections.

Eleni’s festival appearances include the Music Academy of the West, Spoleto Festival USA, National Repertory Orchestra, Orchestra of the Americas, and the Norfolk and Madeline Island chamber music festivals. She was a semifinalist in the Meg Quigley Vivaldi competition in 2019, an international concerto competition for young women bassoon players.

Deeply passionate about musical collaboration, Eleni made her first appearance with the Willy Street Chamber Players in the 2022 season. She has also been featured as a guest artist at the Lake George Chamber Music Festival for the past four summers.

Eleni received her B.M. at University of Wisconsin’s Mead Witter School of Music under Marc Vallon. She earned her master’s degree at the Yale School of Music, studying with Frank Morelli. She was the winner of the Yale Philharmonia’s 2019 Concerto Competition, a finalist for the Eastern Connecticut Symphony’s Instrumental Competition, and recipient of the Thomas Daniel Nyfenger Prize for demonstrating “the highest standard of excellence in woodwind playing.” She currently resides in Miami, Florida.
To learn more about the 2022 YPCA artists, click here.
To learn more about YPCA and view past participants, click here.
Vote Now
RSVP for the YPCA Showcase