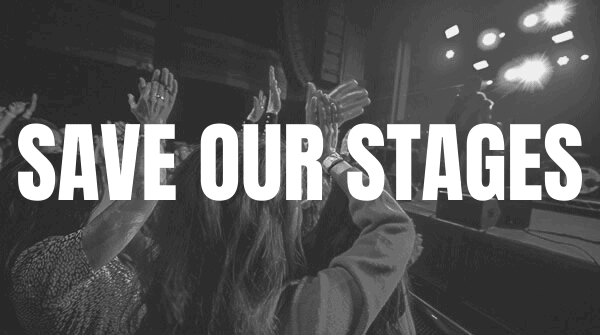 Stakeholders of the Save Our Stages Act, now known as the Shuttered Venue Operators Grant (SVOG), are in full support of the bipartisan “Save Our Stages Extension Act” which will provide more time for entities that were shuttered due to the pandemic to spend the $16 billion in emergency COVID relief.
Introduced today by Sen. Amy Klobuchar (D-Minn.), Sen. John Cornyn (R-TX), Rep. Peter Welch (D-VT), and Rep. Rodney Davis (R-IL-13), the bill extends the date by which approved expenses must be incurred to March 11, 2023, instead of the original statute which required costs to be incurred by Dec. 31, 2021. This does not add more money to the grant fund.
“We’re grateful that once again we have bipartisan support as we navigate as gathering places in the throes of this challenging time,” said Dayna Frank, President of the Board for the National Independent Venue Association and CEO of First Avenue Productions in Minneapolis. “These grants truly have saved our businesses, and with added time, we’ll be in the best position to maximize the use of taxpayers’ funds responsibly, ensuring our ability to thrive, hire employees, and be the economic engines of our communities.”
“The Save Our Stages Extension Act will maximize the positive impacts from this critical grant relief program, which has been essential to the survival of so many movie theaters and live event venues during the global public health crisis,” said John Fithian, National Association of Theater Owners president and CEO. “We extend our gratitude to Senators Amy Klobuchar and John Cornyn and Representatives Peter Welch and Rodney Davis for their continued leadership and tireless efforts on behalf of independently owned cinemas serving large and small communities throughout the country. We urge Congress to move quickly in support of this legislation.”
The organizations which support the Save Our Stages Extension Act include Association of Performing Arts Professionals, Broadway Across America, Coalition of Performing Arts Centers, League of American Orchestras, League of Historic American Theatres, National Association of Theater Owners, National Independent Talent Organization, National Independent Venue Association, Performing Arts Alliance, Performing Arts Managers and Agents Coalition, Preservation Hall Foundation, The Broadway League, and Theatre Communications Group.
Background on why SVOG stakeholders sought this extension:
1. Most envisioned that it would take 45-60 days for the SVOG relief to start flowing once the bill was signed into law on December 27, 2020, but nine months after the law passed and four months after submitting applications, many venues are still awaiting funding.
As enacted, initial grant awards must be used for costs incurred by December 31, 2021. However, many eligible small business owners were not in a position to incur normal costs until they were certain their application was approved. They have been delayed in efforts to rehire employees; repay rent, mortgages, and utilities; or conduct upgrades to HVAC systems to mitigate the spread of COVID until they received the emergency relief. These small businesses need more time to properly utilize their grants as the statute dictates.
2. The Delta Variant is already adding significant roadblocks to our industries’ revival, as music tours and theatrical engagements are canceling, ticket buyers are asking for refunds or not showing up, and ticket sales have stalled, even from early July numbers. For example, major tours, including Garth Brooks, BTS, Stevie Nicks, Florida Georgia Line, and Neil Young, have recently been canceled. We are seeing entire tours, festivals, and even day-of cancellations as performers and their crews test positive for COVID and navigate safety precautions.
With reopening uncertain as a result of the continuing pandemic and COVID-19 variants along with unknown clientele comfort levels, changing guidelines, and varying restrictions at state and local levels, our industry is in need of a longer timeframe for use of these funds.