Quick Links: Covid-19 | Anti-Racism | Livestreaming, Reopening and More | Emergency Response | Building Audiences | Inside Arts | Press Releases
At last, the APAP|NYC+ conference returned for the first time since 2020. The nucleus of a New York citywide explosion of live performance, this magnetic performing arts industry gathering drew professionals from across the continent and globe. The event hosted by the Association of Performing Arts Professionals happened January 13-17, 2023, with the New York Hilton Midtown as its hub. 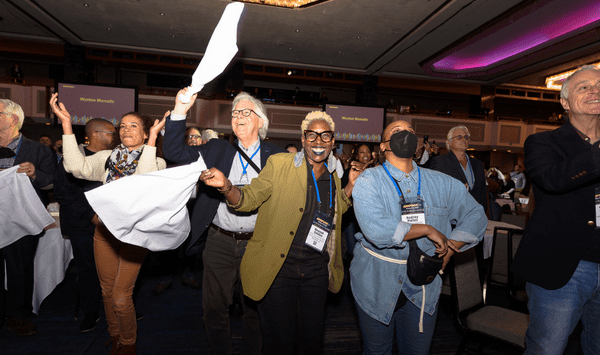 Perennial highlights were the live performance showcases---totaling more than 1000, including JanArtsNYC events---and the EXPO Commons---with nearly 300 exhibitors, mostly agents and managers representing artists of all genres. The buzz of the showcases and EXPO was as electric as ever, if not more so due to the pent-up energy of three years.

As Lisa Richards Toney, APAP’s President and CEO since July 2020, declared at the opening session of the first in-person conference of her tenure, “We are so happy to be BACK!”

And yet, the Opening Plenary---a veritable parade of New York celebrity, ending with a second line led by Wynton Marsalis---to the Closing Plenary with the National Endowment for the Arts chairperson Maria Rosario Jackson---and everything in between felt different.

It was the beginning of a “kinder, gentler APAP community” and by that, we mean that the much of the arts and entertainment industry and most performing arts professionals had come through the pandemic, the great resignation/reshuffle, the call for racial reckoning, not unscathed, but determined. To hold onto joy. To demand equity. To lean into empathy. And to envision a better future for the arts and arts workers.

Here are some of the insights that came from sessions at APAP|NYC+ 2023.
Caption: Opening Plenary APAP|NYC+ 2023 (credit: Adam Kissick/APAP)